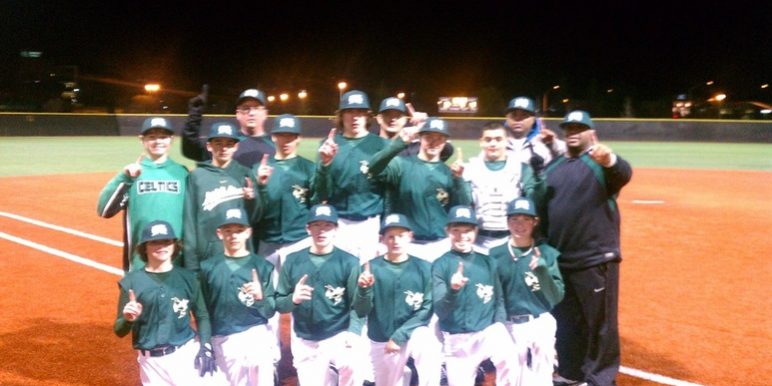 Congratulations to the best speed baseball hornets ( u-13 ) for taking the championship this past weekend @ the frozen rope tournament held @ Mather Sports Complex. Our young men showed character and heart in their climb to the top. After a very rough Saturday in the blistering cold weather (38 degrees all day and night) the hornets lost to golden spikes baseball club 7 to 5. Then in the evening game tied the Vacaville barnstormers 10 to 10.

Heading into Sunday the hornets were slated as the #4 seed. The teams first test was the #1 seed Chico a’s. Starting pitcher Ethan Mayberry shut the leading scoring team of the tournament down. Mayberry 1 hit the Chico a’s. In the top of the 7th inning the hornets rallied to tie the score, and then the magic happened. Pinch hitter Darren Gallagher came up and on the first pitch hit a laser to the right center field gap. Driving in the winning run from second base. Mayberry finished the 7th inning with 7 pitches and sent the #1 seed a’s back to Chico!

All in all, back to back 1 hitters thrown by our pitching staff, timely hitting from each team member and great coaching led to this wonderful achievement. The best speed staff is proud to see our group reaching its potential and knowing that all of our hard work is paying off!!!! Congrats again boys…we are off to a wonderful start!